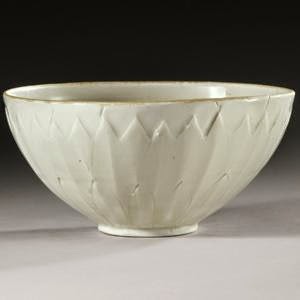 A few years ago, a New York family spent a leisurely Saturday perusing yard sales.  A small 5 inch white bowl caught their eye, but they were only willing to give $3 for it.  It sat on a shelf in their home for six years and was probably used to hold candy.  Eventually, the owners became curious about its value and took it to have it appraised.  To their surprise, they were in possession of a 1000 year old rare “Ding” bowl from the Northern Song Dynasty of China.  Sotheby’s presented it for auction on behalf of the family where it sold for a whopping $2.2 million dollars!  This makes me want to go to a yard sale right now!
As you ponder that story, which value do you place on yourself?  Do you constantly think of yourself as a $3 common bowl, a $2.2 million dollar treasure or somewhere in-between?  I suppose, for all of us, it depends on who is doing the appraising.  Most often, we consider the opinions of others, along with our own performance and appearance to be what determines our value.  If we perform well and others think well of us, we give ourselves high value.  If the opposite is true, we give ourselves minimal value.  At the end of the day, the value of anything or anybody is determined by what someone is willing to give to purchase it.  Right?
Why don’t we stop for a moment and let God appraise you?  As He looks you over, He thinks, then He looks some more and finally He writes down His estimation of you.  His answer?  He is willing to give His only Son, Jesus Christ, so He can purchase you!  YOU, are as valuable to Him as His Son!  He who did not spare His own Son, but delivered Him over for us all, how will He not also with Him freely give us all things? Romans 8:32.
It’s not that we are worthy of salvation through our works.  We are not.  However, God has assigned worth and value to us as demonstrated by the gift of His Son.   The question then is this:  Do you place the same value on yourself as God does?  If so, pray something  like this to your Father.
Father, because You gave the most valuable possession You had when you gave Your Son to die for me, You have made clear that I have great worth in Your eyes.  Thank You!  As a result, because You say I have great worth, I agree with You and say back to You that I have great worth, no matter how I feel today or how I have performed this week. Amen.

Believe it!  It’s the Gospel!